The exact form of our work and services is agreed in advance between the customer and us.

The ILUMASS model is an integrated, completely microscopic simulation model of land use, transport and environmental impacts in urban regions. It was developd in the ILUMASS project (Integrated Land Use Modeling and Transportation System Simulation) funded by the Federal Ministry of Education and Research (BMBF).

For test purposes, S&W and the Institute of Spatial Planning of the University of Dortmund implemented a reduced version of the ILUMASS model in which the time-consuming microsimulation of traffic flows was replaced by the existing more aggregate transport model of the IRPUD model. 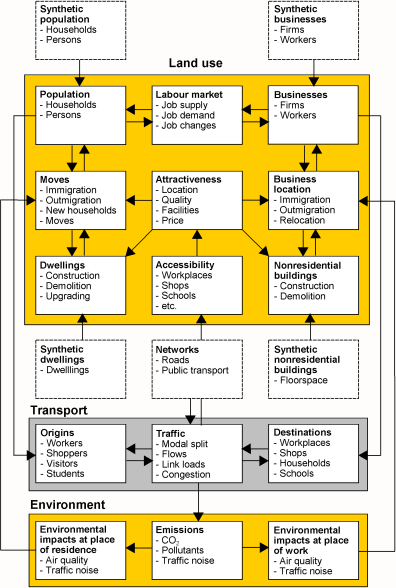 Reduced version of the ILUMASS model

The ILUMASS modell is described in:

The aggregate transport model is described in:

In the ILUMASS project (Integrated Land Use Modelling and Transportation System Simulation), seven German research institutes developed an integrated, end-to-end microscopic simulation model of land use, transport and environmental impacts in urban regions. The ILUMASS model is divided into three ...